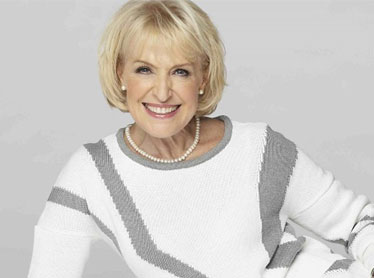 Rosemary Conley is the UK’s leading diet and fitness expert with over 40 years’ experience of helping people lose weight and get fit.

Come and hear the secrets of Rosemary’s astonishing success and hear how her common sense approach has enabled her to stay at the top of her game and weather the storms thrown at her during her long career in the fitness industry.

In 1986 Rosemary discovered a low-fat diet plan, which transformed her body in a way she had never been able to achieve with previous diets.

Rosemary put her experiences down on paper and the result was her Hip and Thigh Diet, which was published in 1988 and captured the attention of the nation. This book and its sequel, Rosemary Conley’s Complete Hip and Thigh Diet, have sold more than two million copies.

Subsequent books and DVDs have seen similar spectacular success, despite being in such a highly competitive market place, with total worldwide sales fast approaching over nine million.

Rosemary has written 37 best-selling books, 31 fitness DVDs/videos and has presented over

400 Cookery programmes on television as well as presenting her own series on both BBC and ITV in addition to appearing weekly with Richard and Judy on This Morning for seven years from 1993 – 2000.

For over twenty years Rosemary Conley Diet and Fitness Clubs trained hundreds of franchisees to run their own diet and exercise businesses and at its peak 180 franchisees were running around 2000 classes each week for over 80,000 members.  The highly successful Rosemary Conley Diet & Fitness magazine had an annual circulation approaching 1 million and Rosemary had her own range of low-fat foods.

As the market and technology has developed, Rosemary continues to be in the forefront of the industry and now chairs one of the UK’s leading online weight loss clubs:

The site includes over 2,400 recipes and over 700 cooking videos – there is something for everyone!

In January 2012 Rosemary appeared in ITV’s Dancing On Ice. She skated with international skating professional Mark Hanretty and reached week 6 of the competition. As a result she holds the record for being the oldest celebrity to go the furthest in the history of the show.

In 1999 Rosemary was made Deputy Lieutenant of Leicestershire and in 2001 she was granted the Freedom of the City of Leicester, the first woman in Leicester to receive this honour. She was one of the invited guests at a reception at Buckingham Palace hosted by Her Majesty The Queen and the Duke of Edinburgh in October 2003 to mark the contribution of Pioneers to the life of the nation.

Rosemary was delighted to be made a Commander of the British Empire (CBE) in the New Year’s Honours for 2004, for her services to the fitness and diet industries.

Rosemary supports many charities and works tirelessly as a Patron for STEPS – a Conductive Education Centre for children with cerebral palsy and other conditions, a charity based in Leicestershire.