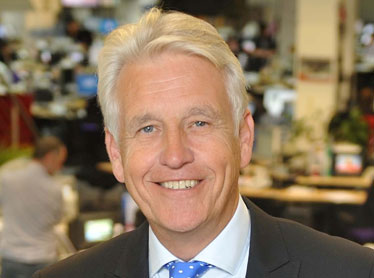 Nicholas Owen is a journalist and presenter from BBC News, Britain’s most watched news channel, and he presents programmes on Classic FM.

Nicholas re-joined the Corporation in February 2007 and for well over a decade before that he hosted all ITN’s major bulletins, including Channel Four News and News at Ten.

He has also appeared in a wide range of other TV and radio programmes, including being a contestant in BBC1’s Strictly Come Dancing. Nicholas also presents programmes on Classic FM.

He began his journalistic career on the Surrey Mirror before moving to Fleet Street where he worked for the Evening Standard, the Daily Telegraph and the Financial Times.

He then switched to television reporting, joining the BBC in the North of England, covering both regional and national news as well as current affairs programmes, before moving to ITN when he reported on everything from The Budget to the Gulf War.

From 1994 to 2000 Nicholas was Royal Correspondent for ITV News. In that capacity he played a major role in reporting on the death and funeral of Diana, Princess of Wales.  He compiled a book on her life entitled “Diana – The People’s Princess” which was updated and republished in 2007.   Nicholas was fortunate enough to work with many members of the royal family – from the The Queen Mother, Her Majesty The Queen, HRH Prince Charles and many members of the family.

His auto-biography “Days Like This” was published in 2012. Nicholas is married to a newspaper journalist, lives in Surrey, and has four children and nine grandchildren.  He was diagnosed with kidney cancer in 2002 from which he has made a complete recovery.  He is the Honorary Patron of Kidney Cancer UK, an Ambassador for the Prince’s Trust and Cancer Research UK and actively supports many other charities.

He was honoured to be presented with an Honorary Doctor of Letters from the University of Brighton in 2015 in recognition of his major contribution to journalism and services to charity.