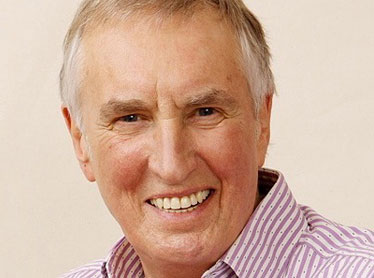 Johnnie tells his story of fifty years at the heart of British broadcasting, stints that involved working on the legendary Radio Caroline, BBC Radio 1 and BBC Radio 2, of the stars and musicians he’s met and worked with and of how he won the hearts of his listeners.

Johnnie made his name in the 60s with the pirate ship Radio Caroline. His night-time show was essential listening for 86% of the night-time audience, which increased to over 20 million Europe-wide on the night of 14 August 1967, as Walker and ‘Caroline’ continued in defiance of Government legislation which silenced all the others when the Marine Broadcasting Offences Act of 1967 came into effect, outlawing advertising or supplies to the ships.

It was the Swinging Sixties and there was a cultural revolution happening!  We led the world in iconic fashion, art and ground breaking music – there was the contraceptive pill and a man on the moon.   Twiggy became one of the world’s first super models and there was the meteoric rise of Beatlemania and the emergence of groups such as the Rolling Stones, the Who & Pink Floyd amongst many others.

of rock’s most acclaimed albums as well as their single “All You Need Is Love” and major releases from many other artists.    The UK won the Eurovision Song Contest for the first time with Sandie Shaw’s “Puppet on a String”.

During his 50 year career in broadcasting, including 7 years on Drivetime for BBC Radio 2, Johnnie has been noted for his knowledge and love of music and championing of new artists.  He has interviewed many of music’s great artists who he now counts as his friends.

Johnnie now presents “Sounds of the Seventies” on Sunday afternoons as well as “Johnnie Walker Meets” –  a series of occasional in-depth interviews with some of music’s biggest names –  recent programmes include exclusive interviews with James Taylor, Sting, Rod Stewart, Tom Jones, Paul Simon and Annie Lennox – all on BBC Radio 2.

He was made an MBE in 2006 and he and his wife Tiggy are now joint patrons of the charity Carers UK.