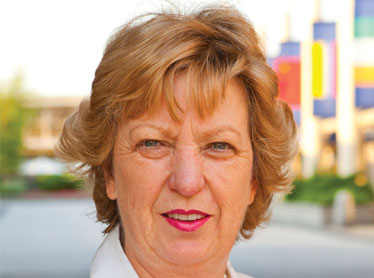 Judith is acknowledged worldwide for her teaching skills in classic flower arranging and cutting-edge floristry in a career of over 30 years.

Talk: ‘Flowers in a Vase’

“Arranging flowers in a vase to show off their beauty can be so easy and give great satisfaction. You just need to know how to combine your flowers, how to select the right vase and how long to cut the stems. Sourcing and selecting fresh flowers and combining them with easy to grow foliage will also be covered in this informative illustrated talk. And bring along your  problem vases for fresh ideas on how they can be used to advantage”.

The Judith Blacklock Flower School can be found in a flower-filled mews in the heart of Knightsbridge. Established for 15 years, it is widely acclaimed as the UK’s foremost flower school.

She is the author of 13 bestselling books, including Flower Arranging: The Complete Guide for Beginners, Judith Blacklock Encyclopaedia of Flower Design, Floristry: A Step by Step Guide, Church Flowers and she is the Editor of The Flower Arranger Magazine, the official publication of the National Association of Flower Arrangement Societies (NAFAS).

In 2011, she organised Flowers@Chicheley Hall, the largest contemporary cut-flower event that has ever been staged in the UK and in 2014 Flowers@Oxford to great acclaim. She regularly appears on television and demonstrates at leading global floral events, including the Chelsea Flower Show. Judith has travelled and taught in Dubai, Turkey, USA, Canada, Japan and Kuwait.

She has arranged flowers at many high-profile venues such as Kensington Palace and taught floral design to personalities including Kirstie Allsopp, Gordon Ramsay, Keeley Hawes, Jason Brown from boyband ‘Five’, John Sergeant and James May from Top Gear. One of her favourite appearances was in Made in Chelsea. Judith has created many bouquets for members of the royal family. She has also acted as a consultant to Topshop, Tesco, BT, Channel 4 and Marks & Spencer.