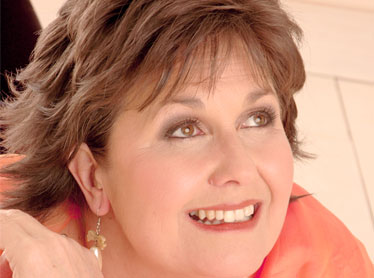 Janine Roebuck is a mezzo-soprano equally at home in opera, operetta, oratorio and popular song and is particularly good in roles which require a touch of comedy.

Informative, moving and hilarious; if you love music and the theatre, or if you or anyone you love has a hearing loss – this is a talk for you.

When Janine was told at the age of eighteen that she was going deaf, many people told her she would have to give up her dreams. Instead she decided to keep her disability a secret. She went on to become successful in both opera and musical theatre.

She managed to keep her disability a secret for over thirty years, before finally deciding to go public.  She now gives inspirational talks on coping with hearing loss – how she followed her dreams and with a positive outlook on life how she achieved her goals.

Janine made her debut with New Sadlers Wells Opera, and has sung principal roles with all the major houses in the UK. As well as opera she sings musical theatre and is best known for her comedy roles.

Improvements in technology are such that Janine’s latest hearing aids use Bluetooth short range wireless connectivity which helps her perform at her peak.  She has decided it is time to be proud, not ashamed, and, with support from Action on Hearing Loss (formerly the RNID), she went public as the only deaf mezzo-soprano in the world!  Janine was a Trustee of Action on Hearing Loss (now an Ambassador) and Patron of Auditory Verbal UK which teaches profoundly deaf babies & children to listen and speak wonderfully.

Over the years she’d confided in colleagues she could trust and inevitably word spread. Responses have varied from astonishment to admiration. One conductor told his orchestra she was deaf only after they’d heard her sing. Their standing ovation is the reaction she treasures the most.

The Champion Award was presented to Janine in 2009, and she was given a coveted place on The Independent ‘Happy List’ in 2010.

In 2019 Janine took the life changing decision to have bilateral Cochlear Implants – making her a bionic woman!

You can watch Janine talking about coping with hearing loss and singing on this link: Oticon Hearing Aid Testimonial