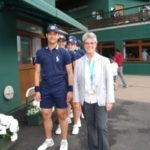 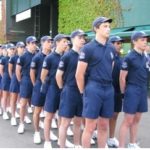 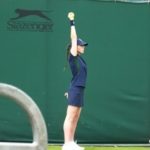 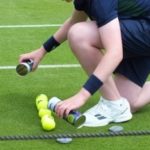 Ever wondered how the ball boys and girls at Wimbledon are trained and prepared for the prestigious annual tennis tournament?  Rosie trained them for 20 years until retiring recently.

First there is a brief history of tennis at Wimbledon, from its beginning in 1877 to the present day, along with all the major changes in-between.

The first ball boys were chosen from Dr Barnardo’s.  Ball girls didn’t come on the courts until 1977 and it wasn’t until 1986 that girls were allowed on Centre Court!

It is a great honour to be selected.  Applicants are aged 15 and 16, but they are only chosen from approved local schools in the area as they must travel to and from home daily during Wimbledon.  While at Wimbledon they don’t attend school – so do they have to be high scholastic achievers to permitted the two weeks off?

BBG’s – as they are called – are not paid, but they are well fed and supplied with their own canteen at Wimbledon.  All other expenses, such as travel and uniform are covered, and the working day is long – 12 hours with one hour on court followed by one hour off.

Rosie can describe the training regime in great detail.  It is rigorous both mentally and physically and starts almost a year before the Wimbledon season.  One of the first tests is their ability to stand stock still with feet shoulder width apart for a minimum of 3 minutes.  If they can’t achieve this task they won’t end up on the final selection list.

From knowing the game and quirks of the players, control of the balls, communication skills, and how not to get the new balls mixed up with the used ones, Rosie can tell how it is all done, and how these young people become confident, capable and disciplined students.